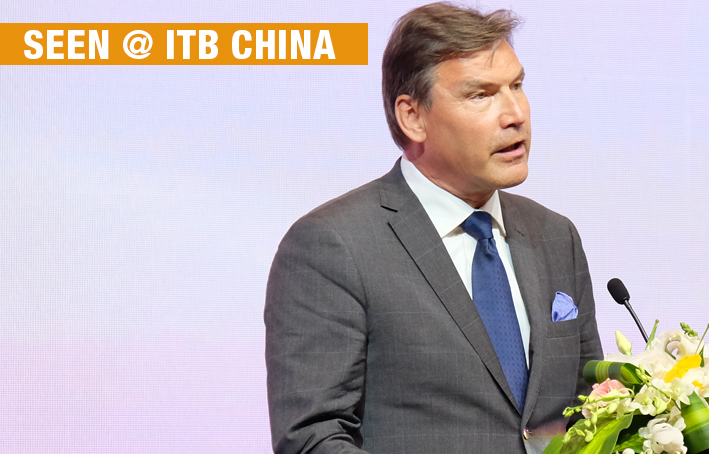 As main partner in ITB China, Finland gained a lot of attention among the Chinese tour operators. With an important delegation headed up by Paavo Virkkunen, Executive Vice President, Visit Finland, the stand of the “homeland of Santa” was busy throughout the show.

The target audience for Visit Finland is “well-travelled and educated individuals looking for new and authentic travel experiences and China’s sophisticated travellers fit this well. Overnight stays from Greater China continue to grow consistently year over year and increased to 358,669 nights in Finland in 2017, which was an increase of 32.2% over 2016 and a three-year increase of 239% since 2014.
While continuing to leverage the success of the StopOver Finland which made it easy for Chinese travellers to schedule stopovers in Finland and discover two destinations during one trip, Visit Finland is continuing to expand trade resources in 2018. Travel products and resources focus on promoting the expansion of travel to lesser known destinations within the country such as the unique Lakeland region as well as the many travel products that make longer stays attractive to the Chinese traveller, especially over Finland’s beautiful summer months. Additionally, Visit Finland is emphasising products catering to specialty travel groups such as educational travellers and winter sports enthusiasts.
Finland’s Market Coverage continues to strengthen in market with Restructured China Team.
With the increasing growth in the China Market, Visit Finland has restructured its China team to provide even stronger support to travel partners moving forward. The Visit Finland team is henceforth led by David Wu (Director, Greater China, Business Finland Oy – Visit Finland). Wu joined Visit Finland in 2013 as a marketing representative for East China market. In 2017, he was promoted to be Visit Finland Greater China Director. After working in the industry for many years, he has a solid understanding of China outbound travel market.

HELSINKI PARTNERS WITH TENCENT
Helsinki was promoting a new service for Chinese travellers at ITB China. The cooperation between Helsinki and Tencent gives the Finnish capital a ground-breaking channel straight into the mobile devices of WeChat users. Helsinki has set itself the goal of being the most digitalised city in the world, and the cooperation with Tencent ensures that the city is already now a globally remarkable innovator in digital tourism services.

The City of Helsinki and Tencent signed the cooperation agreement last September, according to which Helsinki will serve as an intelligent tourism model for Chinese outbound tourism. The two cooperation partners have since co-developed a destination mini program that offers Helsinki travel information to almost one billion WeChat users.

The first phase of Helsinki mini program in WeChat was launched by Mayor of Helsinki Jan Vapaavuori and General Manager Zhan Shu from Tencent Governmental Affairs and Tourism Center as part of the Chinese New Year celebrations in Helsinki.

The initial version of the WeChat Helsinki mini program allows users to access content about Helsinki’s sights, services, events and transportation. Panoramic Helsinki 360-photos, a translation service and emergency help are also included. Helsinki’s open data resources include databases for places, events and services, and these will be utilised through an open API in the next phase of the application. The aim is to build an application that provides users with comprehensive, professional and real-time information and services. In June, the WeChat Helsinki mini program will be revamped to align the visual identity of MyHelsinki. fi and include an interactive map. Soon after that also transportation journey planner and the possibility to pay for transportation will be added.

HELSINKI: THE FASTEST TRANSIT CITY FROM CHINA TO EUROPE
The Finnish airline Finnair offers nearly 40 direct flights a week from seven major Chinese cities to Helsinki. Helsinki’s excellent accessibility has given the Finnish capital a head-start in the Chinese tourism market, and now the same step has been taken also digitally. The number of registered overnight stays by Chinese travellers in Helsinki has more than doubled in the past five years.